Second Year of the atelier is over! It ended Friday with the Best of Gage show. This year I entered my Cup and Scone painting in the still life category. The other categories were portrait, figure, landscape, abstract and sculpture. There were many beautiful pieces entered in the show, huge and colorful pieces covering the walls of all three floors. So many, in fact, my piece seemed to me muted and humble among them. But what the heck, I thought, it’s good to put yourself out there. In a surreal series of events, I received an email the night before the show telling me that my painting was selected to receive an award. And when the awards were revealed, I had not won first, second, or third in the still life category but rather Best of Show. Immediately I thought of all of my favorite pieces in the show and was overwhelmed that Cup and Scone was chosen. As my classmate and friend Maria, who won 2nd place in figure, hugged me I whispered “the piece is so simple.” Maria said “It only has to resonate with one person.”

In this case that person was Fay Jones. This is what the Gage website posted about the Best of Gage guest judge:

Born in Boston, Massachusetts, Fay Jones received a BFA from the Rhode Island School of Design in 1957. Awards she has received include the Joan Mitchell Painters and Sculptors grant in 2013, the Seattle Art Museum’s 2006 Poncho Artist of the Year award, grants from the NEA in 1983 and 1990, the Washington State Arts Commission in 1984, and La Napoli Art Foundation in 1989.

Her work has been extensively collected in the Northwest, and is included in the collections of the Portland Art Museum and the Hallie Ford Museum of Art in Oregon, and the Seattle Art Museum and the Tacoma Art Museum in Washington, as well as the Cities of Seattle and Portland. Major exhibitions include a 2007 retrospective at the Hallie Ford Museum of Art at Willamette University, a 1997 traveling retrospective with the Boise Art Museum, and exhibitions at the Portland Art Museum, the Seattle Art Museum, the Museum of Northwest Art in La Conner, WA, the Anchorage Museum of History and Art, and the Palm Springs Desert Museum in California.
To learn more about Fay Jones , click HERE.

As I’ve mentioned before, the Best of Gage show represents all classes and ateliers within the Gage Academy of Art. Juliette’s atelier, the Aristides Atelier, is the classical art program that exists both as its own entity and also as part of the Gage Academy and resides inside the large brick cathedral school building that looks to all newcomers a bit like Hogwarts. Although Gage Academy (originally Seattle Academy of Fine Art) was established as a school offering “classical training for contemporary artists,” it now also offers all kinds of classes, including abstract and other modern genres. So the Best of Gage show now represents a pretty diverse range of works. Winning Best of Show was a huge honor which I am still wrapping my head around and for which I am so grateful. It feels surreal and also like something to live up to.

Three weeks prior to Best of Gage, on the wall hung nothing but classical art works. We had our Atelier show at the end of May and it was a great success. Our first year students are so talented and hard working that they are giving us advanced students a run for our money. We ended up with a great crop this year even though we only have one fourth year student (they usually dazzle with their thesis projects), it was a very proud moment for us. Juliette selected two pieces from each of us to hang in the 3rd floor gallery hallway. The graduates (some third years who elected not to do a thesis year) had 4-6 pieces hanging. We also had our own stations inside the studios where we could individually show off the rest of our work.

Here’s some of the atelier work before it was put up on the wall:

My Tetris-game-in-progress with my studies in the studio: I don’t have a finished photo. The top left piece, Seneca the Beautiful, ended up being in the gallery outside so this isn’t a great representation of the finished display but you can get the drift. 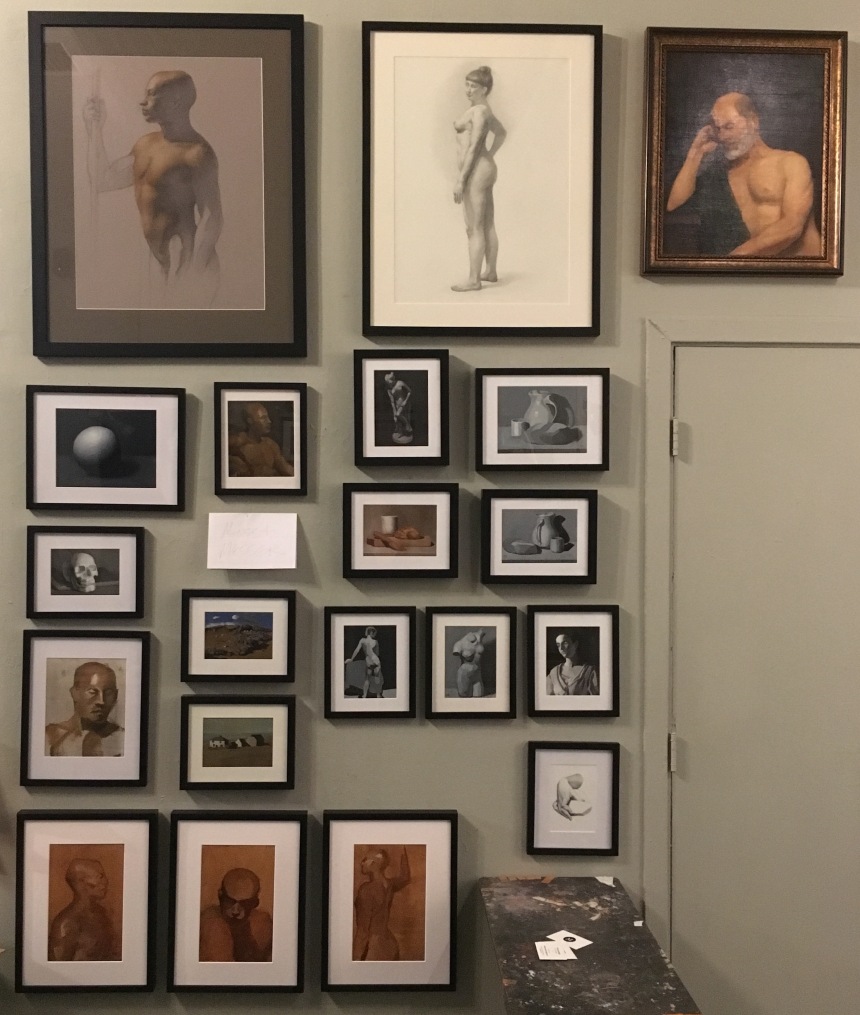 My favorite moment of the atelier show was when so many of my friends were there at the same time. I got to take them all downstairs for a group tour of the studio where I work. It was a private moment in the studio with friends in which I got to share what I do all day with people I care about outside of the atelier. They gathered around smiling pleasantly at me which I took as a cue to orate about the second year in the classical atelier. You know you have good friends when they nod interestedly for about 7 minutes of dissertation and then ask questions at the end. Not sure what I did to deserve these wonderful nerds.

Alas Year Two is over. What challenge, what an adventure. Onward to Year Three! Next year I will be taking on a full color palette. Think of the Cup and Scone piece for a moment. That was done with mainly two colors: ultramarine blue (a deep blue) and burnt sienna (an earthy orange), and of course white in addition to the tiniest bit of yellow ocher for the highlights in the scone. Imagine the possibilities of next year.

For the next couple of months I get to work at a wonderful advertising agency with people I love working with to earn money for next year and then I’m back in the game for year three in mid-September. Stay tuned for a few summer posts. I have some exciting painting projects in the works while I’m on summer break from the atelier including finishing my long-labored cast painting and a rare opportunity to paint a master copy from the original painting inside a museum.